I recently came across the need to build a screening pattern based on the Kimball “Screening” concept. One of the desired outputs was a Power BI report that allowed a data steward to easily identify the failed screen, drill down to the detail and show the row(s) rejected by the data quality rule. To achieve this goal, I had to mimic in Power BI an SSRS functionality called dynamic dataset, which allowed me to, using a single matrix, show different source columns based on a selected screen. Feeling curious already? Then, let’s dive into the details.

A screen is designed to operate on a single input file or database table and contains the data quality condition to check. For example, there could be a Missing Customer Postcode screen which would test for any customers who are missing a postcode.

To allow the data steward to drill down to the detail, the output of the screen had to be stored in a single table. To achieve this, the output of the screens were converted to XML and stored in a column with the XML data type. One important point to note is that XML does not support NULL fields, which means that, if the Postcode is not converted to a NULL string, the column will not be captured in the XML structure.

Parse the column XmlResults to XML 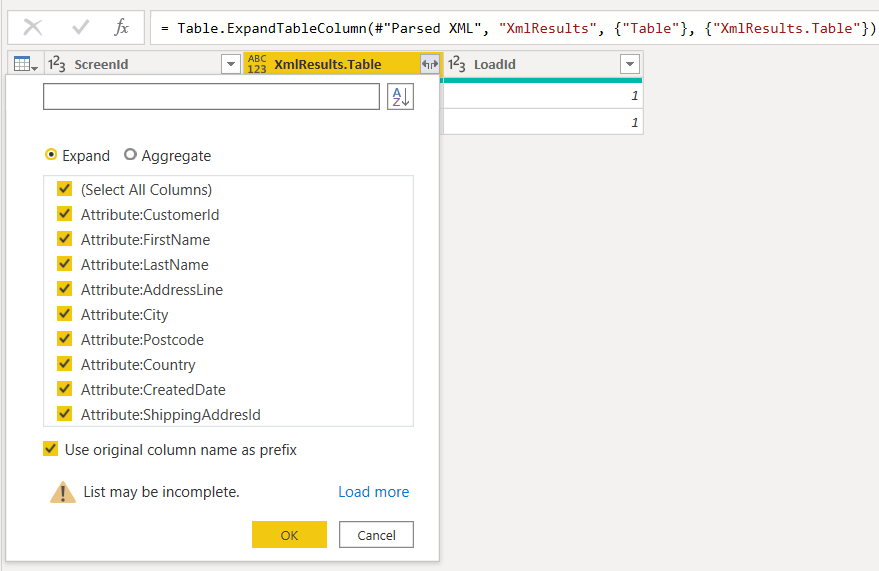 Rename the column names to remove the prefix “XmlResults.Table.Attribute”. Once completed, select all the columns and Unpivot them.

You can see that for Customer, only the relevant columns were selected

Close and apply the transformations. Add a matrix to the canvas and add “Attribute” to “Columns” and “Value” to “Rows”. When selecting a screen, only the relevant columns are shown. This happens because the Columns in the matrix are set to “hide items with no data”.

As always, if you have any questions, feel free to leave a comment.