In March Microsoft released Deep Touch integration for iOS amongst several other improvements to the Power BI Mobile application. This blog will look at a few of those features and examine some of the areas that still need work.

So far it seems Microsoft are doing a pretty good job of developing Power BI for the mobile platform and this is most apparent when they exploit some of the built-in functionality that make mobiles so handy! One of the best features of the latest iOS is 3D Touch integration and Power BI has fully grasped this bull by the horns. Using a Deep Touch, you can launch a pop-up menu offering some of the most useful features such as search and notifications but also quick access to your recently accessed dashboards.

Another big issue that the Power BI team have tackled head on is how to make rich visualisations mobile optimised. For this they have two solutions, the first being the desktop and mobile view options within Power BI desktop.

The mobile view essentially de-constructs your report and lets you drag and drop your visualisations into the mobile template. By default, this view will always be displayed when viewing the report on a mobile device unless you rotate the device into landscape mode in which case the desktop version loads. I have mixed feelings about this feature. On the one hand, I like that I can see both views but if the report were to remain in mobile view but expand to fill the horizontal space as well, this could open up a lot more opportunities for mobile reporting.

However, despite gaining some control in how the report looks on a mobile device there are some pretty major limitations for the time being. Firstly, you cannot specify different properties, such as text size, for the desktop and mobile view. This means that you would need to consider both views when creating a report that will be both mobile and desktop otherwise your visual will be sacrificed as seen above in the deliveries and fragile items cards.

Another drawback is that each visual element has to be snapped to the prescribed grid and this includes the transparent grab handle/border that is used to select the visual. This border is half a grid square tall in the mobile view which means that you get a lot of white space, something you want to reduce in a mobile view.

Finally, visuals cannot be overlaid. Where I have circles around some of my cards in the desktop view, this is not possible in the mobile view.  Whilst you can add an image or logo you could not make use of any backgrounds whether they be an image or just a flat colour.
Thankfully, all custom visuals will work in mobile view and any cross filtering, auto play or auto zoom features (maps) are preserved perfectly.

Microsoft’s second solution is focussed around dashboards. From within the Power BI service you can arrange your pinned visuals into a mobile dashboard by switching the view as shown below. 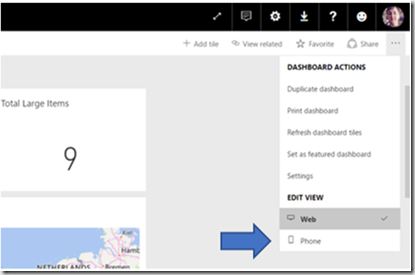 However, the best part is that it if you access a dashboard that doesn’t already have a mobile view then the app will automatically optimise the visuals into a mobile view so you don’t have to!

One of Power BI’s most notable features is Q&A – a method to query your data using natural language. Using a recognisable messenger format this feature is really well replicated in the mobile app and adds another layer of accessibility for non-techie, non-deskbound users.

A relatively new feature to Power BI is the ability to add custom links to a dashboard visual. This can be utilised quite nicely in the mobile app as it will make use of the deep linking technology in iOS so that I can launch a relevant app instead of just a web page. Here I have set a google maps URL as the custom URL for the map visual. Clicking on this in the mobile app launches my google maps app, not a webpage!

Overall I can see that the Power BI mobile team have not tried to just recreate the desktop version but have embraced the mobile platform and have made use of existing features within iOS to present a feature rich app that has a familiar feel to it. Whilst there are some limitations, my next blog will look at how to create a mobile optimised report right from the start so that your users can benefit from mobile BI straight away!

Matt is a passionate data and analytics professional who enjoys sharing his wealth of experience using Azure services through blogging and conference talks.