Although it’s been out for a while, I thought I’d mention, for those who don’t know, that you can download a Fuzzy Lookup Add-In for Microsoft Excel.

The Add-In allows you to perform a fuzzy lookup for Excel data against another Excel dataset. I won’t go into too much detail, as this has already been covered here, but essentially the Add-In requires you to setup two datasets, namely a “left” and “right” table. Once you carry out some configuration/mappings, then the fuzzy match will return all of the rows in your left table, with the appropriate values looked-up from your right table. As an example I’ve chosen to do my lookup based on reseller names and an address: 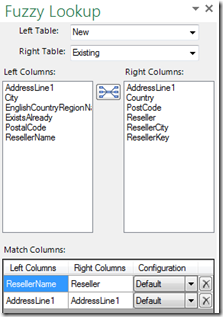 Part of the reason for this post is that I think this add-in could be useful from a self service perspective for power users to assist in MDM/Matching/DW projects. There’s often a lot of trial and error in trying to get the right balance for matching rules, and, given that the Fuzzy Add-in gives similar results to SSIS, it may well be a good place to start with matching an dataset as part of an MDM project, for example. Alternatively, it could be used to carry out pre-matching/clean-up on data before an MDM project starts.

I also wanted to contrast this Add-in to the Fuzzy Lookup transformation that you get in SSIS. Both the Fuzzy Lookup Add-In and the SSIS variant do the same thing – they both match one dataset against another in a fuzzy manner, returning you 1-n matches per row. In fact, according to this paper, they use the same Microsoft Fuzzy algorithm.

With the default settings, at least with my small test datasets, I get similar results in Excel and SSIS, albeit with different similarity numbers. These are the key differences that I’ve noticed:

As I quick test, I started working with Adventure Works resellers and seeing if I could get the same match results from both products. To highlight this, I’ve filtered this down to just 1 reseller (“Bikes World Comp. Store”) that I’ve made up and seeing what are the top 5 resellers both products return. SSIS, with its default settings, gives the following when matching just on the reseller name:

Excel, using the Fuzzy Add-In, gives the following with its default settings:

So overall some very good matches out of the box from the Excel Add-In, certainly comparable to SSIS. What’s interesting about this result set is that “Bike World” is ranked higher in Excel than “World Bike Discount Store”. We can align the behaviour of the two products, in this case anyway, by changing the Containment Bias from a default of 0.8 to 0. This will assign a full penalty to tokens in the right record that are not in the left record. So, as the left record is “Bikes World Comp. Store”, and the right record is “Bike World”, we are by default being lenient on the fact that its missing tokens. Increasing the penalty for missing tokens gives the following, with the top record now matching SSIS:

Of course, you would normally match on more than just the name, plus what’s worked above here for me might not work in other scenarios. But the bottom line is that the Excel Fuzzy Lookup Add-In gives very good matches out-of-the-box, is easy to use for the Excel user and therefore could well be of some use as part of data matching projects.