Following the DISCO theme, Adatis decided to present all the SQLBits attendees with a challenge based on the game Dance Dance Revolution. At the end of the game, the players were presented with two Power BI dashboards, one that streamed the data in near real time and the other representing historical data. This blog will detail the different components used in the demo. 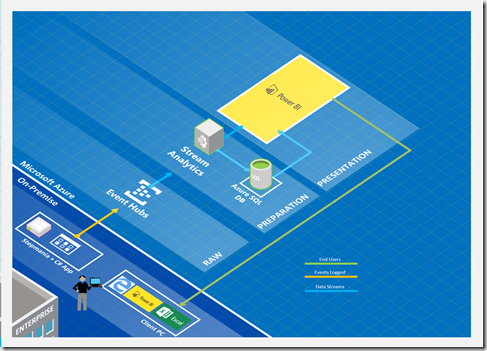 The first requirement was to have a game that could run on a laptop and store the output data in a file. Based on the theme of the conference, we chose the game Stepmania 5 (https://www.stepmania.com/download/). After understanding how it worked and what type of details we wanted to capture, we adapted the program so it was possible to save the output in a TXT file every time a key was pressed. Following is an example of how the data was structured.

Sending the data to an Event Hub

Since we wanted to stream the data in near real time, we needed an application that could read the data from the output file as soon as it was updated. To achieve this, we built a C# application that was sending the data to an Event Hub. To make sure we didn’t upload duplicate data, we implemented a logic that compared the last row with the previous one. If they were different, the row was uploaded and if not, the program would wait for the next input.

To distribute the data between the Azure SQL DB and the Power BI dataset, we used two separate Stream Analytics Jobs.

The first job was using the Event Hub and the reference BLOB as inputs and the Azure SQL DB as output, while the second job was using the same inputs but having a Power BI dataset as an output. Due to the dataset limitations, we ensured that all the formatting was applied in the Stream Analytics Query (eg. cast between varchar and bigint, naming conventions, …).

In this scenario, the streaming datasets only work properly when created by the Stream Analytics Job. Any of the following actions invalidates the connection between the jobs and the dataset:

· Create the dataset in Power BI

When the dataset crashes, the only solution to fix the issue is to delete and re-create it. As a result, all the linked reports and dashboards are deleted.

By the time the demo was built, the connectivity of live datasets to the Power BI Desktop was not available, which means the live streaming dashboard was built using the online interface.

It is important to note that it is impossible to pin an entire page as a dashboard when using live datasets since it won’t refresh as soon as the data is transmitted. Instead, each individual element must be pinned to the dashboard, adding some visual limitations.

The performance of the players could be followed by checking the dashboard streaming the results in near real time. The use of the word near was used several times in the blog because the streaming is limited not only by the internet connection but also by the Power BI concurrency and throughput constraints, meaning the results were not immediately refreshed.

The second report was built using Power BI Desktop and was connected to the Azure SQL DB. 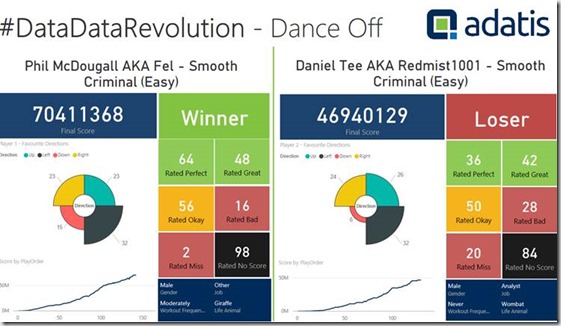 At the end of the game, the players could obtain the following information:

· Who was the winner

· How did they perform during the game

· The number of hits for each rating

· Which direction they were more proficient