I attended the London Power BI Meetup last night. Guest speaker was Peter Myers On the topic of “Delivering Real-Time Power BI Dashboards With Power BI.” It was a great session.

Peter showed off three mechanisms for streaming data to a real time dashboard:

We’ve done a fair bit at Adatis with the first two and whilst I was aware of the August 2016 feature, Streaming Datasets I’d never got round to looking at them in depth. Now, having seen them in action I wish I had – they are much quicker to set up than the other two options and require little to no development effort to get going – pretty good for demo scenarios or when you want to get something streaming pretty quickly at low cost.

You can find out more about Streaming Datasets and how to set them up here: https://powerbi.microsoft.com/en-us/documentation/powerbi-service-real-time-streaming/

I’ve shared this here, mainly as a repository for me, when I need it, but hopefully to benefit others too. 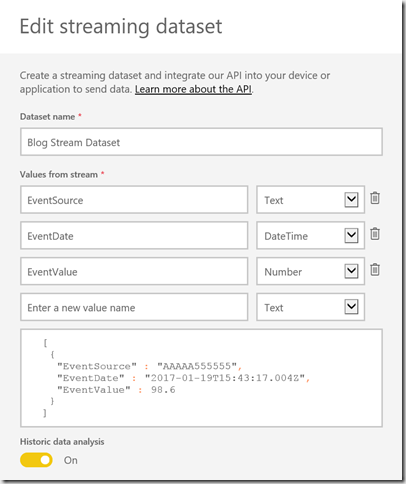 Just remember to copy the Power BI end point to the relevant location in the script.

You can find the end point (or Push URL) for the Dataset by navigating to the API Info area within the Streaming Dataset management page within the Power BI Service: