AMLS provides an environment to help you develop, train, test, deploy, manage and track machine learning models, and the most outstanding feature here is the ease of deployment of models whether that be for batch or interactive scoring.This is a major leap forward and unlike Workbench, AMLS is already in GA which gives some reassurance in terms of Microsofts’ commitment to the product going forward.

Gone is the data preparation GUI which formed part of Workbench but actually in my experience the limitations that product had means most people ended up writing their data preparation in Python anyway. In has come integrated deployment via Docker containers but so cleverly this been integrated that this should not frighten anyone who doesn’t have experience in this area, its done all for you.

This image shows the path:-

As you can see, the path starts with a trained model. This can be trained on your local machine, a Data Science VM running in Azure or using an AMLS service.

It contains a number of Tabs,  as can be seen below 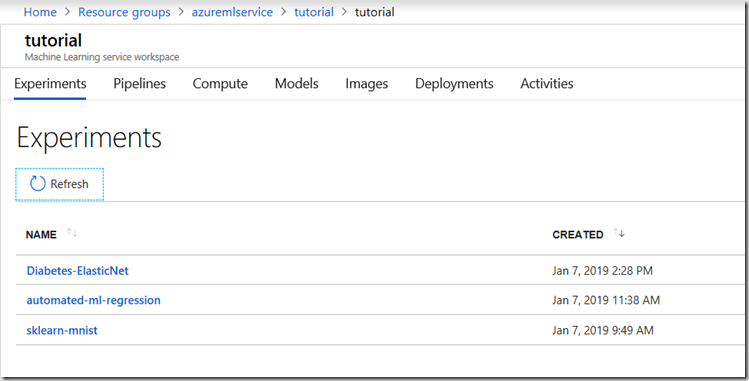 Calling out the main ones

Experiment – contains a log of all experiment runs performed using the AMLS service as shown below: It includes the number of runs and how they have performed, and you can click through on the Run Number to see logs associated with that run 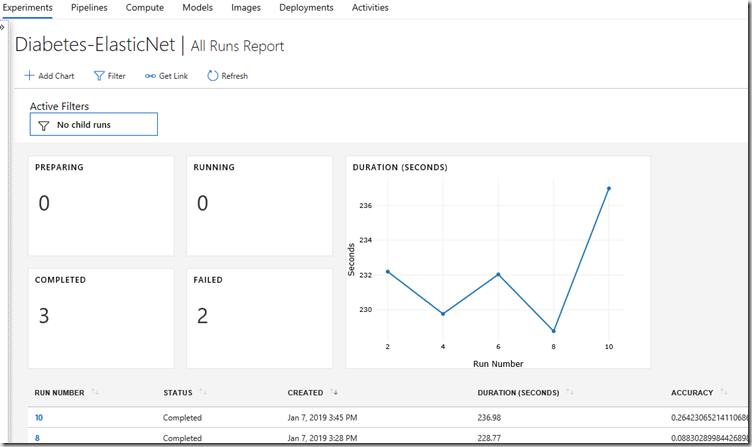 Deployments – Contains the live deployments which are being used to service requests either via API or batch request.

Getting started is a bit daunting, where do you start? Well luckily Microsoft have provided a few example workbooks which make it easy to get up and running and to rapidly understand and appreciate this service. You can work through them fairly easily and I would recommend these as a good path to understand how to work with AMLS

The first is available here:-

1) Setup of the local Python environment,

2) Connection to the workspace in AMLS

3) Creation of an Experiment

7) Registering a model (creating a pickled model in the Registry)

The second workbook is available here:-

This explains how to:-

2) Deploy and test the model as a webservice

I hope you enjoyed this. Let me know if you have any questions