Interesting to see yesterday that XLCubed have released version 5 of their popular OLAP reporting tool. As I’ve mentioned before, I’ve always found XLCubed to be very powerful and easy to use, and therefore, in my opinion, it’s definitely one of the best Excel OLAP reporting tools out there.

Version 5 sees the introduction of some new features in the Excel/web editions, namely:

Personally, I’m used to using the Excel Edition to slice and dice cubes to get what I want quite easily. Although it’s not entirely new to V5, you can carry out the same kind of ad-hoc analysis in the Web Edition, as shown in the following video. The end result is that you are able to build the kind of dashboards as shown below, whether in the web or the Excel edition: 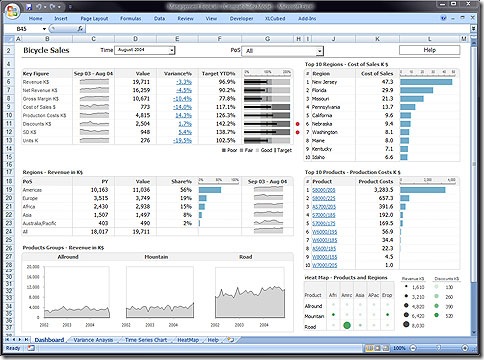 As usual, the evaluation editions for the Excel and Web versions can be downloaded here