In PerformancePoint Planning Server there are several pre-defined model types that satisfy different requirements. One of these model types is Financial Model with Shares Calculations and its primary use is for the financial consolidation of a group of companies where the ownership of the companies within the group is not 100%. 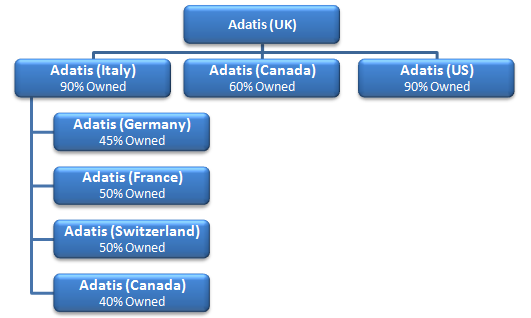 In order to work out the consolidated accounts of the Adatis (UK) Group, one of the first steps is to determine the effective ownership of each of the companies within the group. This needs to be done from the perspective of the holding company.

Below outlines the effective ownership from the perspective of Adatis (UK) for the entire group.

PerformancePoint Server ‘With Shares’ Financial Model contains a built in Shares Calculation job that should, in theory, determine the effective ownership for a group of companies.

In order to test the PerformancePoint Shares Calculations you need to load data into two of the three additional measure groups that are automatically created in a ‘With Shares’ Financial Model.

Each company needs a set of shares issued and the number of those shares that have voting rights. To keep everything simple I’ve issued all companies with 10000 shares with all shares having voting rights.

For each of the parent companies the share ownership needs specifying. We have two parent companies, Adatis (UK) and Adatis (Italy). The shares owned have been set according to our company breakdown illustrated above.

With the data loaded the shares calculation job can be executed. The results are posted to the third of the additional measure groups, Control and Ownership.

It’s the POWN columns, highlighted, that contain the effective ownership and encouragingly this matches our expectation. So it looks like, under these simple conditions the Shares Calculation job does what it should.

Incidentally, there are a few additional columns that are of interest.

– The PCON columns are the percentage that will be used in the consolidation.

– The PCTRL (Ultimate Percent Control) columns specify the controlling percentage. This is essentially controlled by the number of voting shares compared to shares owned and effective ownership.

o If the entity is the holding company for the model, the consolidation method is Holding.