The purpose of this blog is to explore the process of running ML predictions on SQL server using Python. We are going to train and test the data to predict information about bike sharing for a specific year. We are going to be using the provided 2011 data and predict what 2012 will result in. The 2012 data already exists inside the dataset, so we will be able to compare the predicted to the actual amount.

To run ML predictions on SQL server, we are going to install  SQL server 2019 Developer Edition and run the predictions on a local database. As well as installing and running SQL Server 2019, we need to enable the functionality of ML Services (Python and R). In order to do this, go to ‘SQL Server 2019 Installation Centre (64bit)’ by typing into Start menu and follow the instructions provided on the link on ‘ML Services (Python and R)’. Another package which is required to in order run Python in SQL Server is a module called ‘revoscalepy’, but this has been enabled by standard for SQL Server 2019, Windows and Linux.

If you haven’t yet already got SQL Server Management Studio (SSMS), let’s get SSMS installed at this time as this is the tool we are going to use to manage our SQL Server.

And lastly, we are going to use VS code as a Python IDE. In order to setup the VS Code with the necessary tools, we need the following (These extensions can be installed inside VS Code under Extensions):

Let’s start with some SQL and Python!

Like mentioned in the Introduction, we are going to be using a bike sharing (may need to sign up if you have not got an account already) dataset which was fit for the purpose of this exercise. Although there is 2 CSVs within this download, we will use the ‘day’ CSV.

First thing we are going to do is create a database which we can use for this tutorial, feel free to use the script below:

After creating the database, we are going to import the CSV into our SQL Server, to do this, right click on the database that we just created (you may need to refresh your instance) and follow the instructions on ‘Import Flat File’ feature provided in SSMS. When the wizard gets to the Modify columns section, change it to as shown below: 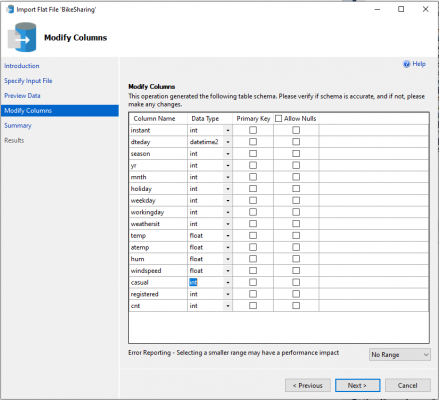 After completing the database and table creation, we are going to go to our VS Code and run the following script to import the data from SQL Server to Python (Make sure to change server details in ‘MYSQLSERVER’ space to your server details, most likely it will be a ‘.’ if on windows as it is a local server):

Some results should appear similar to the snippet below:

As you can see from the snippet above, we are just importing the data which exists inside our SQL Server table and using some python to view it in our Python IDE. Now that we have imported the data from our SQL Server, we are going to train the model, which means that  we are going to provide a ML algorithm which is used to learn the subset of the dataset we are focusing on for this exercise. We are going to be creating some models using a linear regression algorithm. Add this code below, to the end of the code shown above and run together in your Python IDE:

We are using one of the popular Python libraries, ‘Scikit-learn’ to understand the dataset as part of the process of predicting the bike sharing count for the year 2012. There are different variables such as depend variables and independent variables used to study the data closer. We can now predict the count for BikeSharing using a Prediction function and our models. Add this code below, to the end of the code shown above and run together in your Python IDE:

Then we need to go to SSMS and run this script in order to store the model being produced from the algorithm.

We are now going to create a stored procedure with embedded python scripts to create the linear regression model inside our database. We are using some of the Python script we wrote up previously as part of the SQL stored procedure and generate the linear regression model which then can be stored in the SQL table as reference. We can see that in the variable, @input_data_1 on line 26, we have a SQL select statement which is specifying that we are only training the data which is ‘< 2012’ because we are trying to predict the count for the year 2012.

We are going to create another stored procedure to predict the count of bike sharing using our models. Now that we are closing in on the final parts of deploying our models, we are going to be using the data generated by the previous stored procedure which is stored inside the SQL table (sharing_py_models) as reference point for this query to run. In the previous stored procedure, we looked at line 26 as it was specifying all data which was ‘<2012’, but we can see this procedure that we are picking the data which ‘=2012’, this is to do a side by side comparison of how much the ‘cnt’ should have been and what the outcome actually was for bike sharing dataset.

We are going to create a table to store the predicted data which will be generated using the model created earlier. Note that the same datatypes are used for the columns for the new table.