In my previous post I have demonstrated how we can create Power BI CICD deployment pipeline with DevOps classic pipelines. This blog is going to show slightly different approach. I am going to focus on how to create DevOps pipeline for Power BI content with YAML.

I assume that reader:

High level Architecture diagram for my solution looks like below. It is composed of single shared dataset that contain the model and Power BI reports with the live connection configured to the shared dataset. Everything is deployed to the same workspace. 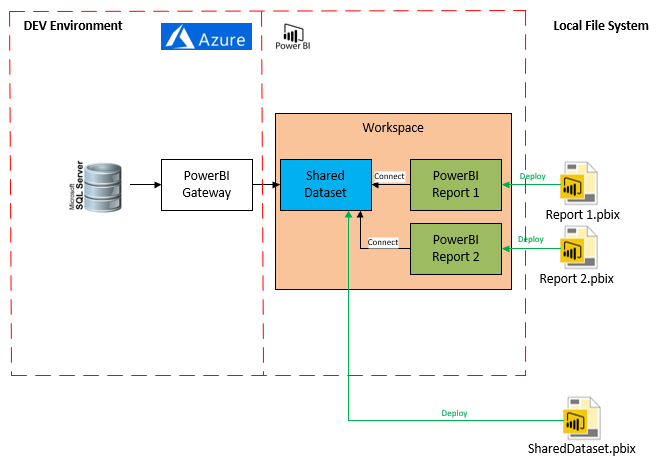 Tools necessary for setting up pipeline

This need to be created/configured before starting:

Ready solution with the scripts can be found here.

Power BI Content deployment is very manual. In me previous blog I have explained reasons why and demonstrated how we can use classic DevOps pipelines to eliminate most of the deployment pains. Classic pipelines were great to start with for less advanced users, but they have some minor disadvantages that has been described below:

All the problems described above can be overcome with a single DevOps YAML pipeline. The main idea behind YAML pipelines is to keep pipeline definition as code.

This way provides some significant advantages over classic approach, that is:

Our pipeline is going execute set of PowerShell scripts. The main role of this PowerShell scripts is to use Power BI REST API and PowerShell Modules to deploy Datasets and Reports to chosen workspaces. All the configuration is injected from DevOps pipelines variables into scripts so values can changes between environments.
Scripts used in the solution has been created for the configuration specified below, they may require some modification if your architecture is different. I have used the same scripts in classic pipelines so there is more details available in my previous post.

Our deployment pipeline is going to be composed of 3 stages:

This approach is not going to split build and release into separate pipeline although this can be achieved if required. In this example I used single pipeline to store both stages for the simplicity. The consequence of that is that all the stages are going to be deployed automaticaly.

Before we start we need to put solution with all the code in the source control. I preffered choice is to use DevOps GIT.

I organised my solution like below to separate scripts, shared datasets and Reports. Raports are additionaly grouped by the Power Workspace Folder – e.g. reports in “PowerBI_CICD” would  be deployed to “PowerBI_CICD_Dev” and “PowerBI_CICD_Test” workspace. 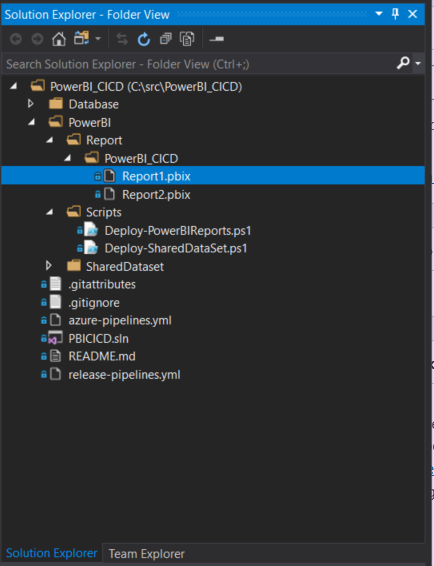 To create new pipeline we need to navigate to DevOps portal and follow below steps:

YAML pipelines should be first choice for solutions that required to be setup on different tenancies e.g. template deployed by consultancy firm on the client side.

You can download all materials from this blog from here, including solution template of the solution.