The MDS Hierarchy Member permissions have been given a complete revamp in SQL Server 2012. As explained here, the hierarchy member permissions are purely optional and allow you to limit the access to a specific set of members.

Even though the actual member permissions are optional, you may have a need to purely allow a user to browse and/or update the Derived Hierarchy. This is also something that’s been affected by the aforementioned change, so I want to explore here how we would grant users access to a Derived Hierarchy.

In 2008 R2, on the model tab, you got a Derived Hierarchies node, as shown in the image below:

If we contrast that to SQL Server 2012 (albeit with a different model), we don’t have a Derived Hierarchies node:

Therefore, to access the actual hierarchy, according to this article, you need to give the user Update permission on the model. That’s not the only way to do it, but certainly working only at the entity level, or the member level, is not good enough. To explore, lets look at an example. I have the sample Customer model installed and I want to give a test user access to the following CustomerType hierarchy, which is just made up of the CustomerType and Customer entities: 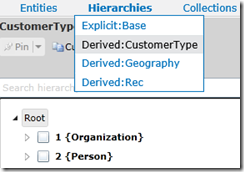 Going to the User and Group Permissions, just quick confirmation that assigning Update permission to the Customer and CustomerType entities is not good enough. As shown below, the user does not have access to any of the Derived Hierarchies that I wanted: 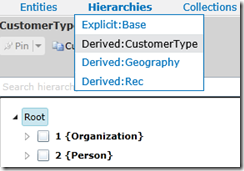 However, the simplified security comes with a slight drawback, which is to get access to the Derived Hierarchy we’ve now given the user Read Only access to all entities in the model: 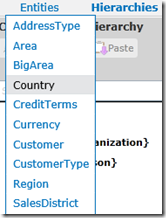 You may not want to grant a user access to all entities, but thankfully it can be avoided by granting an explicit Deny at the entity level. For example, as shown below I’ve set an explicit Deny for the AddressType entity:

This will ensure that the user now doesn’t see the AddressType entity on the Entities menu. Now that the user can see the hierarchy, what about restricting access to the members? That’s a bigger topic, so I don’t want to cover it here, but I will just provide a useful tip. When you’re testing your security, don’t forget that member permissions are not applied immediately! The following article explains how to immediately apply the member permissions, which is something that I’d recommend carrying out whilst testing.

Packt have just released a second version of their ‘MDX Cookbook’, titled ‘MDX With Microsoft SQL Server 2012 Analysis Services’, authored by Sherry Li and Tomislav Piasevoli. As I’m one of the technical reviewers of this book, it’s put me in a good position to be able to put together a review of the book in this blog post.

The new SQL Server 2012 version of the book is similar in terms of content and structure to the original, presenting a number of solutions to common MDX problems in a ‘recipe’ format.

In the first two chapters, the book covers basic MDX techniques, such as the layout of a basic query and a variety of techniques for working with sets. The pace of the book warms up nicely here, starting with a few basic concepts, before gradually getting more complex.

After a useful chapter on working with time in MDX, there are some excellent chapters that give what should be useful recipes on common reporting techniques, such as top/bottom members, ranking and averages.

As the book progresses, there are some more complex chapters that cover areas such as linear regression, complex sorts and recursion – to name a few. Whether the recipes are simple or complex, they works well, as each recipe is packed with step-by-step instructions and screenshots, all based on the SQL Server 2012 Adventure Works cube. 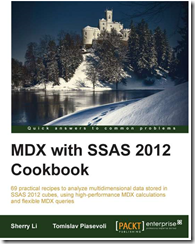 Although it’s also in the first edition, I particularly like the chapter ‘When MDX is Not Enough’, which talks about how modifying the cube design can assist you when writing some MDX queries. Essentially the chapter promotes evaluating if you can modify the cube design in some way, rather than writing very complex MDX, which is something that I completely agree with.

The book differs slightly to the 2008 R2 version in that a few more of the basics (e.g. basic MDX query structure) are covered in the introductory chapters. This seems to work well, meaning someone relatively new to MDX can pick up some simple concepts, whereas someone who is more experienced in MDX will also get a massive amount out of the book.

So overall this comes highly recommend for your bookshelf or Kindle…