There’s been a whole host of changes to MDS in the SQL Server 2012 RC (Release Candidate) 0 that came out the other week. This blog post gives an overview of the changes, before diving into detail on a few of them. At a high level, the following changes have been made to MDS:

Let’s take a look at each of these changes:

Although the UI improvement (shown below) is good, the best thing about the Master Data Manager changes, in my opinion, is that clicking on the Explorer feature no longer takes you into the Model View, but instead takes you straight into your master data for your core entity (e.g. in a Customer model this entity would be Customer). I’m not sure if this would get a bit frustrating if you didn’t want the core entity, but then again everything seems very quick in RC0, so I don’t think it’s really going to matter. 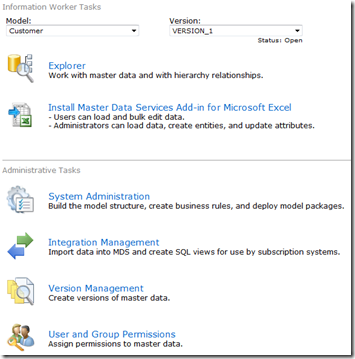 There’s also a new button next to a domain-based attribute that apparently has been designed to help with Many-to-Many relationships. I can definitely see that working, but it’s useful to have anyway to jump to the member details for the domain based attribute that you are viewing, many-to-many or not:

The collections interface is now much slicker, getting the Silverlight makeover seen in other areas of Master Data Manager. Switching between collections, for example, which could take a while in R2, now happens very quickly, making collections far more useable. The screen shot below shows how you edit collection members by picking members from one of the entities and adding those over into the collection by clicking the Add button:

The MDS Excel Ribbon has been given a makeover, meaning that you now see the following in the ribbon:

It’s interesting to see that the Favourites section has been replaced with the concept of ‘queries’. The idea is that you can send a query file via email to another user, providing that user has the Excel add-in. When the user double clicks on the query file (extension *.mdsqx), Excel will open and make a connection to MDS, using the connection and filter information provided in the file. This will result in Excel opening, with the user prompted if they would like to connect to MDS:

If you wanted the code to be auto-generated in 2008 R2, you had to use a business rule. You can still do that if you want, but the create entity admin screen has changed slightly to include an option to auto generate the code. This works slightly better than business rules in my opinion, at least as far as the Excel add-in is concerned, as the code is returned to the user immediately after publishing, whereas the business rules require you to do a refresh in Excel and of course need more development! Here’s a screenshot of the add entity screen: 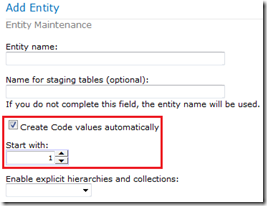 Deployment has been altered in SQL 2012, with the addition of a new deployment tool, plus the fact that subscription views now get deployed. It seems that the current R2 deployment method (in the Administration section of Master Data Manager) is still included but now will not deploy data. To do that you need to use MDSModelDeploy.exe, as explained here. As an example, here’s how you can deploy the sample Customer model using MDSModelDeploy.exe, for default installations:

Master Data Manager now supports a set of parameters that allow the MDS UI to be displayed without the header, menu bar and padding area. This means that MDS can now be incorporated into SharePoint or other websites. For the details on this, as well as more details on the above points, take a look at the following Technet article.