Testing the latest technology on the latest platforms is always very important to us, in order to ensure we are up to date, give our clients an unbiased view of what’s out there and what’s coming up, and how it will affect them.  We have been involved with PerformancePoint for sometime now and have had good success, however with the impending release of SQL Server 2008 and Windows Server 2008, we thought it time to get up to date with PPS on a Server 2008 box, running SQL 2008.

With Windows Server 2008 in RC1 and SQL Server 2008 in RC1, we know we are now close to testing the fully fledged version.  So, time to install it all.  Sever Installs with no dramas at all, quite hastily in-fact.  Following that is SQL 2008, which also installs without any hicup this time, however does take a very long time to install, and interestingly installs Visual Studio 2005, not 2008 (which is released the same time as SQL and Windows Server).  So we are up and running, we have a perfect install of SQL 2008 on a Windows server 2008 sever, time to install PPS. 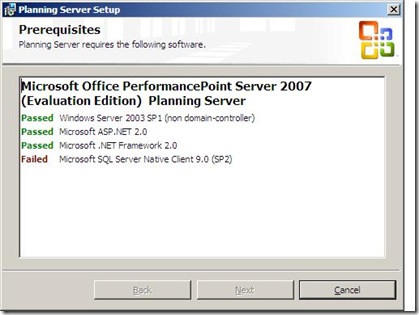 On Checking the prerequisites for this we instantly come up with a problem.  PPS Planning, looks for a specific version of SQL, SQL server 2005, and therefore does not recognise SQL 2008.   This causes somewhat of a problem.

Changing the Registry also doesn’t seem to help, while trying to trick the install of the correct version.  All the other components seem to install fine, and therefor the only issue currently is Planning.  An obvious solution would be to install SQL 2005 Side By Side, and simply use the SQL 2008 Database.  However this is not an ideal solution, and I will be continuing work with this in the new year, as well as raising this issue with Microsoft.

I will post a follow up to this when we have resolved the installation issues.  In the meantime, have a great new year!