‘It’s not what you say; it’s how you say it.’ The same applies to data. Sometimes data lies, and this blog is an explanation of how. With this information, you can spot data quality issues and subsequently improve the value of your data.

By positively or negatively framing data, you can mislead, persuade, and lie. For example, if I said that 1% of young adults in London are violent, you may not have a massive cause for concern. However, if I said that there are 10,000 violent young adults in London, you may be more worried. We can deceive either with intention or not, and sometimes it’s because we want the perceiver to think a certain way.

The framing effect can include decoys, which is famous in supermarkets. For example, if you have a £30 drink next to a £10 drink, you will probably not feel as bad with buying a £10 drink. Regarding presenting data, we can do the same thing. One can compare one data set to another and change the context. Framing is famous for investment graphs. For example, when trying to show a good performance of an investment, one may hide a crash in previous years.

We often try to quantify the unquantifiable. It is not always possible to measure and weigh human experiences, anecdotes, and feelings. To some, happiness is an unquantifiable concept. If I asked you to rate your happiness from 1 to 10, you would put a result. This rating does not examine what 10 means to you; it does not examine the context, nor does it allow for examples. This gets worse when you ask a large pool of people to also rate their happiness. So, an average score is not valuable if current happiness means different things to a group of large people. This is not to say that quantifiable data is useless. However, sometimes to give validity to quantitative data you must add context with qualitative information. 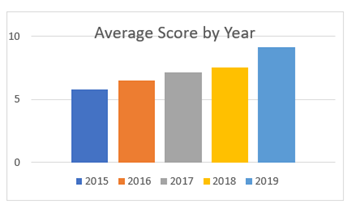 This short blog has been an introduction to three issues when representing data. For more, I would recommend looking at David Spiegelhalter’s twitter and books!