As I see it, Graph Theory is the dark horse of Business Intelligence. It comes in many names and variations: Social Network Analysis, Network Science or Network Theory, but they all have the same algorithms and principles. A common misconception is that graph theory only applies to communication data such as online or traditional social networks or a network of computers and routers. This blog aims to show you how Graph Theory algorithms can uncover hidden insights in a range of business data. I *promise* to keep this light on mathematics and heavy on business value.

Let’s first get stuck in with some terminology and network graphs.

As with any mathematical study, Graph Theory comes with a fair handful of jargon:

Below are examples of network graphs: 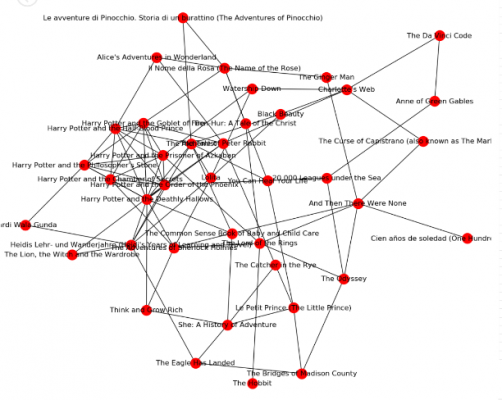 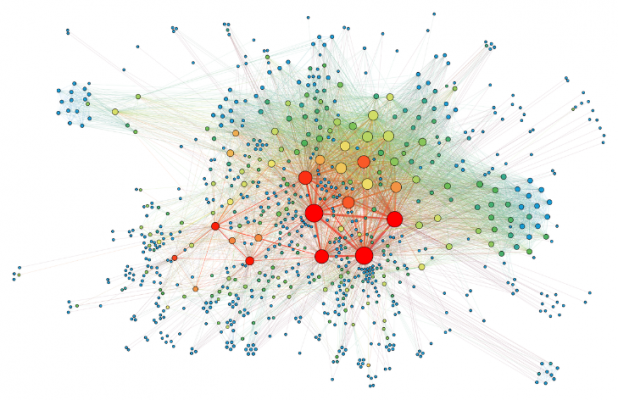 Despite the differences in colour and size, these are both examples of plain vanilla network graphs. Martin Grandjean’s graph on the right is also great visual example of two popular graph theory metrics: the size of the nodes is dictated by their Degree Centrality and the colour is dictated by their Betweenness Centrality. These two metrics will be discussed later in the article but it’s great to know that the results of graph theory algorithms can also be visualised on a network graph. 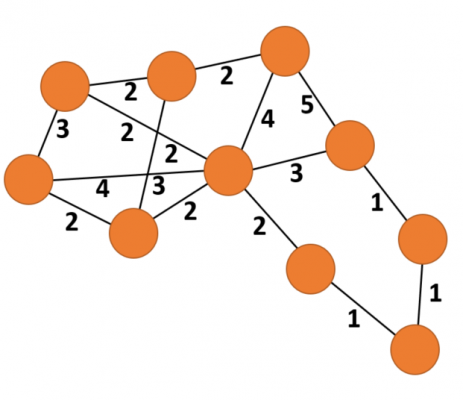 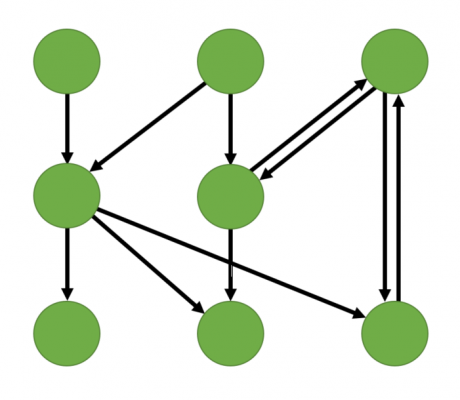 The graph in orange (left) is an example of a weighted graph. This is a network where the edges among nodes have weights assigned to them. When visualised, weights associated with an edge can be represented by a number, like in the example above, or by the thickness of the line.

The graph in green (right) is an example of a directed graph. This is a network where the edges among nodes have a direction assigned to them. Directed graphs will have an arrow as opposed to a line to represent the edge and direction. Some algorithms will take the direction into consideration when calculating metrics.

It is possible, and quite popular, for a graph to be both weighted and directed.

One reason graph theory usually is often overlooked when organisations build their business intelligence roadmap is that the strategists responsible don’t see any examples of network graphs that apply to their own data. Network graphs can be built from any data that has relationships, not just social networks or computer networks. Here are some examples:

As you can see, network graphs are a fantastic way to represent and visualise the relationships between entities. But this isn’t their only purpose. Network graphs are usually built to provide a unique data structure to perform calculations upon.

This brings us to my favourite subject…

The centrality metric comes in many flavours with the most popular including Degree, Betweenness and Closeness. These are used to calculate the importance of a particular node and each type of centrality applies to different situations depending on the context.

Degree centrality is by far the simplest calculation. It is a count of how many edges are connected to each node. A node with a high degree centrality, which is a node with lots of edges, is generally considered a highly active node. If the network graph represented a network of flights between airports, the airport with the highest degree centrality would be the busiest airport. (Centrality can be further granulated by splitting it into 2 values, the in-degree and out-degree, in directed graphs. These values can determine whether a node is prominent, with lots of other nodes reaching towards it, or influential, with the node itself reaching out to many other nodes.)

As a general rule, centrality metrics will be positively correlated. By this I mean that nodes with high degree centrality scores will commonly have high betweenness and closeness centrality scores. However, this isn’t always the case. When the above centrality metrics appear to conflict with each other, there is likely something really interesting about the position of the node in the network. Refer to the table below to see how this plays out:

PageRank (PR) is another centrality metric, but I thought it was worthy of its own section.

As with all graph theory algorithms, PageRank can be applied to network graphs in any context or domain – not just to search engines. For example, in neuroscience, the PageRank of a neuron in a neural network has been found to correlate with its relative firing rate and, in ecology, PageRank can be used to determine species that are essential to the continuing health of the environment.

Twitter uses this algorithm on a graph of users which contains shared interests and common connection to present users with recommendations of other accounts to follow.

The assortativity algorithm is another really cool concept. It measures the preference for a network’s nodes to connect to others that are similar in some way.

Online social networks such as Twitter or Facebook provide a heap of proof of assortativity uncovering hidden insights in big data. For example: One study uncovered that twitter users who tweeted far from their expected location (ie when travelling away from home) were much more likely to create posts containing positive language. Another study uncovered that those who post positive tweets were more likely to interact with others with a high happiness score, alternatively those who were unhappy and post negative tweets were more likely to be connected to others of a similar poor well-being.

The resilience of a network is often dictated by the assortativity coefficient which makes the properties of assortativity very useful in fields such as epidemiology, since they can help understand the spread of disease or cures.

Other Simple (but no less insightful) Graph Metrics

The application of all the above algorithms has never been simpler. Programming libraries and tools have been built to take all the complexity of graph theory and abstract this behind GUIs and commands. My favourites include NetworkX (this python library is intuitive and powerful) and Gephi (a network visualisation tool perfect for those exploring graph theory with no programming background). Graph databases such as Neo4j, Gremlin and CosmosDB are making graph theory easier to productionise.

Graph Theory as a theme for data analytics and data science isn’t a new concept – it is used in studies into online social networks, it forms a significant role in Artificial Neural Networks and has also gained recognition as a useful framework in which to consider the human brain in terms of its structure and function but in the realm of Business Intelligence, graph theory is underestimated.

PS. I surprisingly pulled through on my promise to be light on the mathematics – not a single equation in sight!