All EDI transactions get defined by EDI message standards. It is vital to have proper governance processes for data quality. When information is missing or in the wrong place, the EDI document might not be processed correctly.

Each X12 message is made up of a combination of the following elements:

The data element is the smallest named unit of information in the X12 standard. Data elements can be broken down into types. The distinction between the types is strictly a matter of how they are used.

A segment is a logical grouping of data elements. In X12, the same segment can be used for different purposes. This means that a field’s meaning can change based on the segment.

The rules for X12 envelope structure ensure the integrity of the data and the efficiency of the information exchange. The actual X12 message structure has primary levels that are hierarchical. From highest to the lowest, they are: 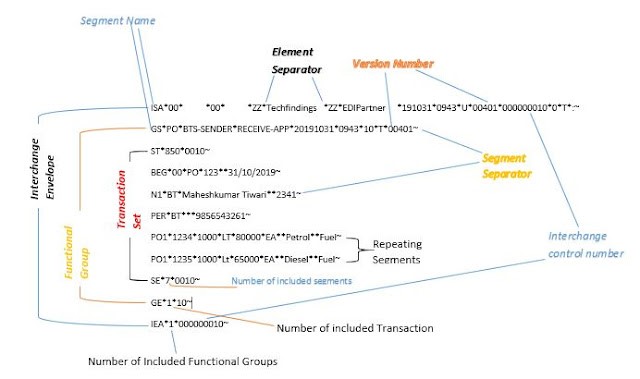 The Interchange Envelope often referred to as the “outer envelope,” is the wrapper for all the data to be sent in one transmission. It can contain multiple Functional Groups. This characteristic means that transactions of different types can be included in the Interchange Envelope, with each type of transaction stored in a separate Functional Group.

The Interchange Envelope is defined by the header and trailer

This is the beginning segment of almost all EDI documents. The purpose of this segment is to identify the sender and receiver, date, time and control number information. The ISA segment is the only segment that is fixed length record. This is done thus that EDI systems can derive the sender, receiver, element separators, sub-element separators, and segment terminators that will be used during EDI transformation

Functional Groups, often referred to as the “inner envelope,” are made up of one or more Transaction Sets, all of the same type, which can be batched together into one transmission. The Functional Group is defined by the header and trailer segments.

and the Functional Group Trailer (designated GE) segment appears at the end:

Many Transaction Sets can be included in the Functional Group, but all local transactions must be of the same type.

Within the Functional Group, each Transaction Set is assigned a functional identifier code, which is the first data element of the header segment.

Each Transaction Set also known as a transaction contains:

In an X12 message, the various delimiters are part of the syntax, dividing up the different elements of a message. The delimiters used in a message are defined in the interchange control header, the outermost layer enveloping the message.