What is the issue

While recently working on a SQL Server 2012 Tabular cube in Visual Studio I came across an extremely frustrating issue where the visual layout of my measures was re-ordered. You are most probably aware that the actual structure or ordering of the measures within the workspace of a Tabular table in Visual Studio holds no relevance to how Visual Studio sees or uses the measures however, if you are like me then you will naturally organise your measures into some kind of pattern making them easier to use, maintain or locate.

In this instance, I had all of my visible ‘switching’ measures listed in the first column and then their hidden, dependant measures which were different date analysis calculations listed in adjacent columns. For example, all of my ‘Year to Date’ calculations were in the second column, my ‘Month to Date’ calculations were in the third column, etc. Eventually I had over 20 visible switching measures in the first column, each with 8 separate hidden date analysis calculations giving me a total of 160 measures which were all neatly organised in the table’s workspace. An example of what this may look like is shown in the following diagram;

At a later point I opened the table to add a new measure and to my surprise all of the existing measures had moved position and been restructured as shown in the following diagram;

For the solution, we were using TFS as our source control and by going back through the version history of the SSAS Tabular project I found that a change to a completely different table which was checked in weeks earlier had the changes to this table’s layout checked in with it. Unfortunately, as there had been several other changes and check ins since this change, rolling back wasn’t an option. Here I had two options, painstakingly cut and paste each measure back into its original location or leave the table in its new format and move on. Although I have a slight OCD side to me when it comes to things like this for times-sake of the project I left it how it was; as I mentioned earlier the structure of the measures on a table holds no real relevance in SQL Server 2012 or 2014, it just purely helps with management and maintenance of the groups of measures. A colleague has also run into this issue since and their table was re-structured differently but Visual Studio seems to either add an additional column or take an existing one away and restructure the measures accordingly.

I am unaware to the exact reason for this happening and therefore can’t give a suitable way to structure your tables for prevention. There is only one way I found to correct this issue once it has occurred other than manually cutting and pasting your measures back to the way you want. Luckily one of our team had not worked on the project since the initial check-in of the project which had the restructured table and had not got the latest code of the project. I copied their Model.bim.layout file which is located in the project folder in File Explorer and replaced my version with it. After restarting Visual Studio and re-opening my Project I had found that my table structure was back to its original layout. The issue here is that we have multiple developers working on the same Tabular project but different child tables therefore simply going through every table to check it hasn’t been restructured before every check-in would be inefficient as a layout change could easily be missed.

The solution that our development team adopted was to separately attach the Model.bim.layout file to the solution in a Solution Items folder and then have this stored in source control as shown in the diagram below; 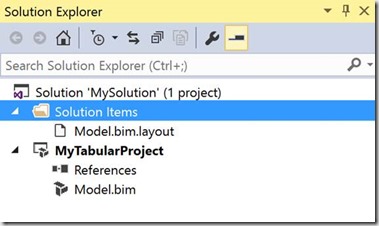 Although this extra step which is needed whenever changes to the Tabular project are made will add time to the check-in process it is in my opinion worth it to ensure the structure of your tables in a Tabular project are kept consistent and easily maintainable; especially when they start to get large and complex.

One thought on “SSAS Tabular Tables Losing Structure of Measures”