We’ve spoken about the MPP nature of SQLDW, and how it scales by changing the number of compute nodes associated to a fixed number of storage distributions. But the way that you organise data across these distributions can drastically change how the system performs – if it’s done badly, one of your compute nodes will be doing all the work and your performance will be very poor.

For now, there are two main methods of distribution. We can focus on spreading data evenly across all distributions to ensure we get predictable performance or we can distribute on a specific column to optimise for specific query performance. These distribution types are known as ROUND ROBIN and HASH distributions respectively.

If I wanted to perform a count of records, grouped by a particular field, I can perform this on a round-robin table. Each distribution will run the query in parallel and return it’s grouped results. The results can be simply added together as a second part of the query, and adding together 60 smaller datasets shouldn’t be a large overhead. For this kind of single-table aggregation, round-robin distribution is perfectly adequate!

However, the issues arise when we have multiple tables in our query. In order to join two tables. Let’s take a very simple join between a fact table and a dimension. I’ve shown 6 distributions for simplicity, but this would be happening across all 60. 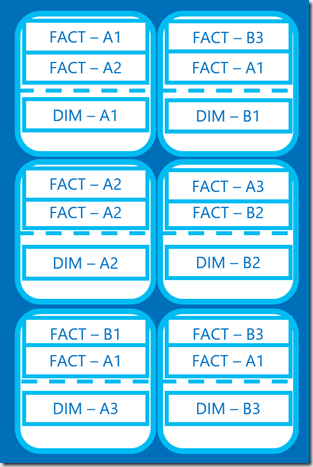 In this case, both tables have been distributed using ROUND ROBIN. There are an even number of records on each distribution, however there is no consistency where records are stored. There are multiple fact records for “A1” but they are held on different distributions.

If I run a simple select statement joining the two tables, each distribution needs to be able to run the query in isolation. Taking the first distribution, we have records with foreign keys for A1 & A2 on the fact, and only records for A1 on the dimension. But more than that – the server doesn’t KNOW which records it has. 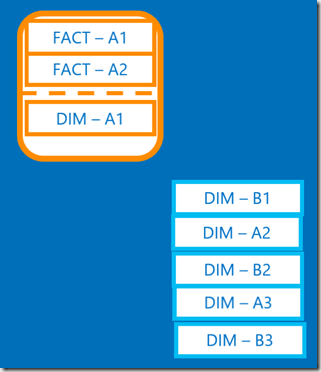 This happens at query runtime. So when you’re user is trying to get the results of a select statement, they have to wait while the system reorganises data. This is done for the specific query and dropped after execution – so it’ll happen every time the query is run.

Basically – data movement is bad. It’s not disastrous, it’s unavoidable in many queries, but it’s something you should have in mind whenever designing your distributions.

Let’s take a look at our fact and dimensions, assuming they were distributed on the foreign key: 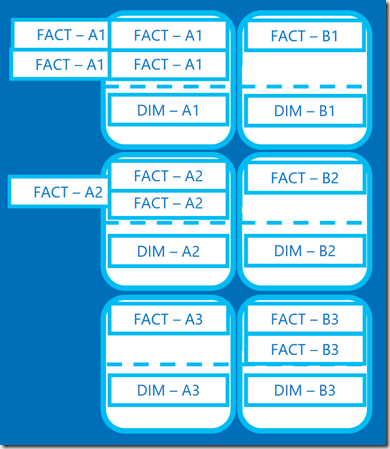 You can immediately see two things – firstly, all records relating to A1 are on the same distribution as the A1 dimension records, same for B1, B2 etc. Secondly, there is obvious skew – there are more A1 records than on any other distribution! This means that the distribution with the A1 records on with be slower to finish it’s query than the others.

This is a tiny example – two extra records makes very little difference, but when we’re dealing with hundreds of millions of records, this skew can become significant. SQLDW can only return queries once all distributions have finished executing, meaning the whole query is only as fast as your slowest distribution.

However, when we execute our query this time, let’s look at our A1 distribution: 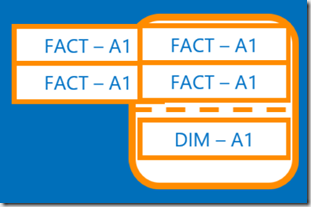 We now know which records this distribution holds for both tables, we also know that this distribution can execute the query without the need for data from other distributions. The query can therefore execute immediately with no data movement steps taking place – we have effectively eliminated a whole step from the query.

In APS/PDW world, there is a third distribution type – REPLICATED. This would create a full copy of the table on all distributions, eliminating the need for many types of data movement. At the time of writing, this is being worked on but has not yet been released, even within preview.

Based on that knowledge, we’re after the following factors for a good distribution:

That’s probably the hardest part of designing an Azure SQL Datawarehouse – a lot of the performance and design comes down to knowing how your users will query the system, and this is rarely something we know in advance! Luckily, it’s fairly easy to change distributions, we’ll come on to that in future posts.