As you may all know Terraform serves a great purpose in deploying resources and infrastructure into your Azure environment, however, Terraform can also be used to automate and consistently deploy Azure Policies which can be defined prior to any resources being generated. In this blog, I will cover how you can import policies into your Terraform State to then deploy into an Azure Resource Group in order to secure your landing zone prior to deploying any resources.

In order to assign a policy you first must define the policy, and to do this you need to write some fairly complex Terraform which can be slightly painful however with terraform import and terraform show the Terraform code can be defined for you, making it easier to get going and deploy the policies.

Firstly, create your Policy definition statement but without defining any parameters so it looks like the below:

Once you have then initialised this with a terraform init you can import an Azure Policy into your state by running the following command:

The definition id can be obtained in the Azure Portal by navigating to policies then selecting the policy you wish to import and then grabbing the definition id.

Now that the Policy has been imported into the state, the terraform code now needs to be generated so that definition can be assigned and the code re-used to deploy to another Azure Tennent.

If the command terraform show is now run, Terraform will now generate the code that is in state file and this code can now be copied and added to your main.tf file. 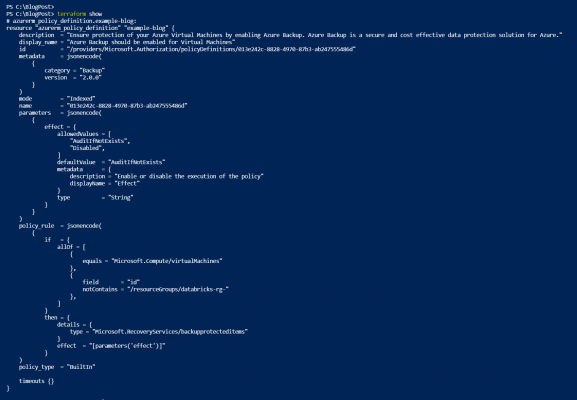 Now that the policy has been defined in the previous steps, we can now assign this policy to the scope in question, in this case, we are going to assign the policy definition to a resource group that we will create on run time, using the following code:

This code is simply stating that we will create a resource group called “test-resources-blog-post” in West Europe.

We are then going to assign the policy definition from the ID which we defined further up and apply this policy to the scope of the resource group that we are going to create.

Once this has been done we can run the three terraform commands in this order:

Now that one policy has been deployed it makes it easier to rapidly import others in the Terraform thus going forwards having the ability to generate and deploy policies into Azure consistently and rapidly.

I hope you enjoyed this blog, please read our other blogs here