One of the new features of SQL Server 2017 was the ability to execute Python Scripts within SQL Server. For anyone who hasn’t heard of Python, it is the language of choice for data analysis. It has a lot of libraries for data analysis and predictive modelling, offers power and flexibility for various machine learning tasks and is also a much simpler language to learn than others.

The release of SQL Server 2016, saw the integration of the database engine with R Services, a data science language. By extending this support to Python, Microsoft have renamed R Services to ‘Machine Learning Services’ to include both R and Python.

The benefits of being able to run Python from SQL Server are that you can keep analytics close to the data (if your data is held within a SQL Server database) and reduce any unnecessary data movement. In a production environment you can simply execute your Python solution via a T-SQL Stored Procedure and you can also deploy the solution using the familiar development tool, Visual Studio.

When you download SQL Server 2017, make sure, during the time of installation on Feature Selection, you select the following:

Please see here for detailed instructions on the setup. Make sure you download the latest version of SQL Server 2017 as there are errors within the pre-built Python packages in previous versions.

Once the installation is complete, you can now try out executing Python scripts from within Management Studio. Before we begin, we need to make sure we enable the execution of these scripts.

In order to see if we can run Python scripts, run the following:

If run_value = 1 that means we are allowed to run our Python scripts.

Now, for the change to take effect, you need to restart the SQL Server service and you are good to go!

The basic syntax for executing Python scripts is as follows:

The mandatory arguments to provide are @language , @script .

@language = Indicates the scripts language. Values are R or Python.

@script = This is the body of the Python script

@input_data_1 = This is a T-SQL statement that reads some data from a table within the database.

@input_data_1_name = This is where you can name the variable used to represent the T-SQL query defined above. For executing Python scripts, the form of data here must be tabular, however for R it is slightly different.

@output_data_1_name =  Specifies a name of the variable that contains the data to be returned to SQL Server upon completion of the stored procedure. For Python, the output must be a pandas dataframe.

By default, result sets that are returned by this stored procedure are output with unnamed columns. If you would like your result set to contain column names, you can add WITH RESULT SETS to the end on the stored procedure. As well as specifying column names, you will also need to provide the data types. You will see the difference between including it and not in the examples shown below.

This system stored procedure, can also be used to execute R scripts, simply specifying the language in the @script parameter.

Please see here for more information about this stored procedure.

N.B Please be aware that formatting is very important and should be one of the first things you should check if you get an error during execution. There are various Python formatting sites online to help with this.

The examples below are to demonstrate how to use the syntax and can be classed as basic in the grand-scheme of what Python can do as a language.

In the above example, we simply printed the input value of the dataset. If you look at the output returned in SSMS, we receive the value 1 but with no column header.

If we add WITH RESULT SETS, we get the following:

In this piece of code, we are looping through rows of a table (dbo.Test) and printing the value of each row.

The output in SSMS is as follows: 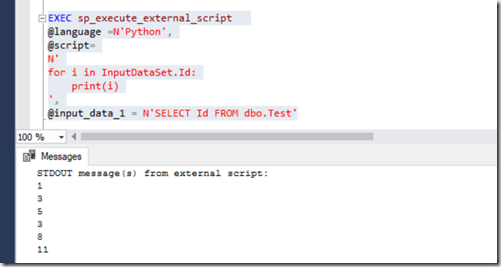 In this piece of code, it shows how you can use variables and print the value. 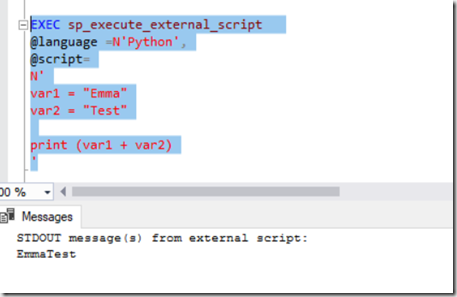 There are lot of things we can do, however, we can achieve these basic concepts using normal T-SQL so there has been nothing new or exciting to see.

A more interesting scenario, which is slightly harder to do using T-SQL, is we can use Python to perform some descriptive statistics of data we pass into it.

For this, we need to import the pandas library to take advantage of it. The pandas library is a package which provides data structures designed to make working with relational data easy and intuitive. See here for more information.

By using ‘describe’ we can get all the usual statistical measures for the columns that we pass in. 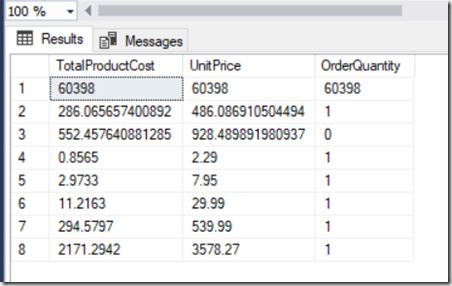 Now, a few words about the Python code used above:

Data Frame: A data frame is a data structure within Python which is like a table that we are used to within SQL Server. It contains a built-in function named “describe” which allows us to calculate the basic statistics of our dataset. We pass in the InputDataSet to the describe function and then this is converted to a data frame using the DataFrame function.

OutputDataSet: The resulting data frame is assigned to the result of the output stream and uses the default output name ‘OutputDataSet’

The example above is using data from FactInternetSales from the AdventureWorksDW. The fields needed to be converted to float as they have ‘money’ datatypes and that is not a supported datatype in Python.

Once you have got to grips with the basics, you can move onto what Python is great at – Machine Learning scenarios. One popular machine learning scenario is text analysis (or sentiment analysis). Sentiment analysis is analysing a piece of text to see if the sentiment is positive or negative. A good example of this would be applying it to tweets on Twitter to see if they are positive or negative. Using Python in SQL Server 2017 brings the added advantage that you can use pre-trained models out of the box to do your analysis.

In order to use pre-trained models, you need to add the models to the SQL Server instance where Machine Learning Services is installed (instructions are below):

1. Run the separate Windows-based installer for Machine Learning Server. Detailed instructions of what you need to install can be found here. 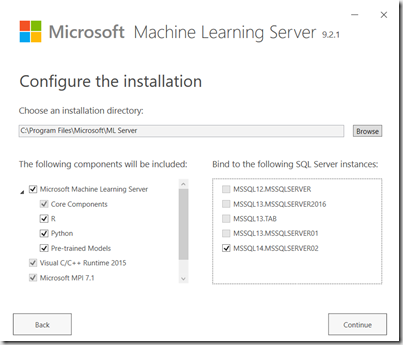 You should only need to tick the box for Pre-trained models as this is an update to what we already have.

2. To check that they have installed correctly, open the command prompt (Run as administrator) and navigate to

and run the following

Now you have everything set up you can begin using the pre-trained models. I will be using this and giving my thoughts in a future blog, however, in the meantime there is a Microsoft blog which provides step by step instructions on how to perform this analysis.

In summary, Microsoft have made it easy to integrate running Python code from within SQL Server and made it more accessible to people who are used to working within a SQL Server environment.