One of the many exciting announcements made at MSBuild recently was the release of the new Cosmos DB Bulk Executor library that offers massive performance improvements when loading large amounts of data to Cosmos DB (see https://docs.microsoft.com/en-us/azure/cosmos-db/bulk-executor-overview for details on how it works). A project I’ve worked on involved copying large amounts of data to Cosmos DB using ADF and we observed that the current Cosmos DB connector doesn’t always make full use of the provisioned RU/s so I am keen to see what the new library can offer and look to see if our clients can take advantage of these improvements.

In this post I will be doing a comparison between the performance of the Cosmos DB connector in ADF V1, ADF V2 and an app written in C# using the Bulk Executor library. As mentioned in the Microsoft announcement, the new library has already been integrated into a new version of the Cosmos DB connector for ADF V2 so the tests using ADF V2 are also using the Bulk Executor library.

All tests involved copying 1 million rows of data from an Azure SQL DB to a single Cosmos DB, the scaling settings used for the resources involved are:

Each test was repeated 3 times to enable an average time taken to be calculated.

The document inserted into each the database looked like the below:

To set up the ADF V1 test I used the Copy Data Wizard to generate a pipeline that would copy data from my Azure SQL DB to Cosmos DB. I then executed the pipeline 3 times, recreating the Cosmos DB collection each time.

Each test behaved in a similar way, the process slowly ramped up to 100,000 requests per minute and sustained that throughput until completion. The tests only consumed around 3,000 RU/s out of the 10,000 RU/s provisioned to each partition in the collection (each collection was created with 5 partitions). 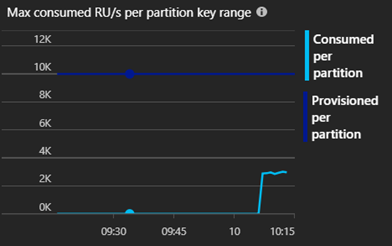 The performance increased after each run with run 3 taking 513 seconds, nearly 3 minutes quicker than the first test. I can’t explain the differences in time taken however, it seems that ADF progressively ramped up the throughput quicker after each run so it may be down to scaling within the ADF service itself.

To set up the ADF V2 test I again used the Copy Data Wizard to generate the pipeline. I then executed the pipeline 3 times, recreating the Cosmos DB collection each time.

ADF V2 represents a massive improvement over V1 with a 75% increase in performance. The connector used more than the provisioned throughput meaning some throttling occurred however, this means that the collection could have been scaled even further to obtain higher performance.

Interestingly the ADF V2 requests didn’t appear on the number of requests metric shown in the Azure Portal so I’m unable to look at how many requests ADF V2 was able to sustain. I’m unsure of the reason for this however, it could be something like ADF using the direct connection mode to Cosmos DB rather than connecting through the gateway meaning the requests aren’t counted.

The performance of ADF V2 was more consistent that V1 and remained reasonably steady across all tests.

To set up the C# test I wrote a quick C# console application that uses the Bulk Executor library, the application was running on my local machine rather than within Azure so there will obviously be a performance hit from the additional network latency. The source code for the application can be found at https://github.com/benjarvis18/CosmosDBBulkExecutorTest.

The performance of the C# application is less consistent however, this is probably due to the network from my local machine to Azure. My application is also not very scalable as it is loading the whole dataset into memory rather than streaming it, as would be required with a larger dataset. The actual code itself is probably also not as optimised as it could be.

Overall however, the performance of my C# application was still 50% better than ADF V1.

The final results of the tests are below:

As above, ADF V2 is the clear winner in the test offering a 75% increase in performance when compared to ADF V1. This represents a huge performance gain and could provide some significant costs savings for users that are loading large amounts of data into Cosmos DB. My C# application offered 50% better performance than ADF V1, running outside of Azure without any optimisation so the performance benefits of the new library are significant.

The new library is an exciting development for Cosmos DB and allows us to fully utilise the capabilities it has to offer when dealing with large amounts of data. I look forward to making use of these benefits in projects, especially the significant improvements in ADF V2!

As always, if you have any questions or comments please let me know.