The EDI standards are designed in such a way that it helps to create documents with most of the details along with the Interchange details (envelope details like To, From, Timestamp etc.), and are released for use as a specific version e.g., 4010, 5020, 6010 etc.

A typical supply chain order processing scenario consisting of various messaging transactions would look like as shown below.

Before the cloud, the traditional way of integrating systems and applications together with partners’ systems happened on-premise, with middleware like Microsoft BizTalk Server. Microsoft’s integration solution BizTalk Server has been around since 2000. It is a very mature platform with excellent enterprise EDI integration capabilities. There are two important components of BizTalk server architecture – messaging engine and orchestration engine. 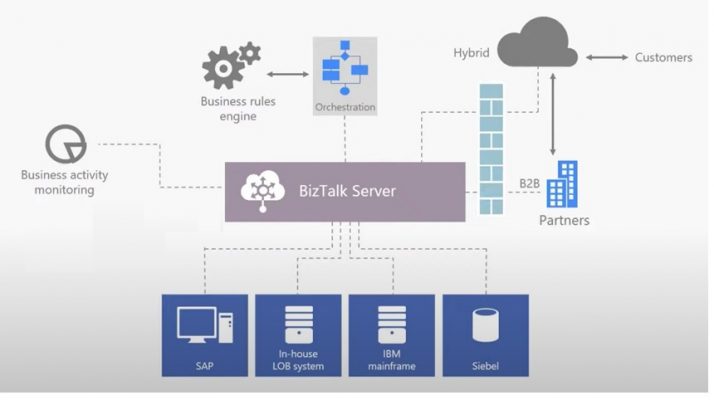 In the simple most basic scenario, we receive a message through a receive adapter.

The message is then delivered into a database called the MessageBox

The logic that drives a business process is implemented as one or more orchestrations, each of which consists of executable code.

Each orchestration creates subscriptions to indicate the kinds of messages it wants to receive.

When an appropriate message arrives in the MessageBox, that message is dispatched to its target orchestration, which takes whatever action the business process requires. The message is then sent out using a send adapter, which uses an appropriate mechanism to communicate with the application for which this message is destined. The Hybrid environment is a group of adapters allow BizTalk easier to connect to Azure iPaaS and utilize its cloud integration capabilities.Integration Platform as a Service (iPaaS) is a suite of cloud services that helps users develop integration workflows which connect applications residing in the cloud or on-premises and deploy them without installing or managing any hardware or middleware. The main components of Microsoft iPaaS solution are: 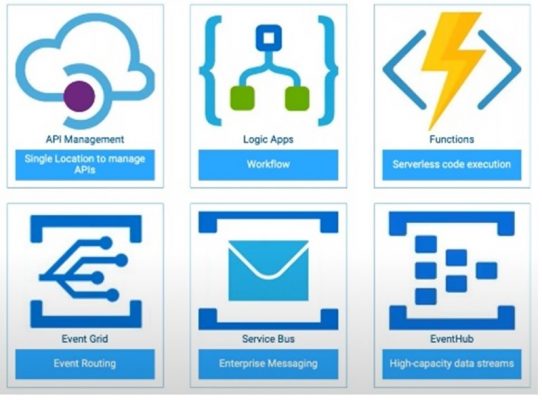 #Service Bus is a highly reliable cloud messaging service that facilitates messages between applications and services.

#Event Grid is the built-in support for events coming from Azure services, like storage blobs and resource groups and allows easily build applications with event-based architectures

#Logic Apps, is the Microsoft’s core iPaaS product. It’s a browser-based workflow engine that provides a way to connect applications and data using a rich set of connectors. They are composed of two key components: 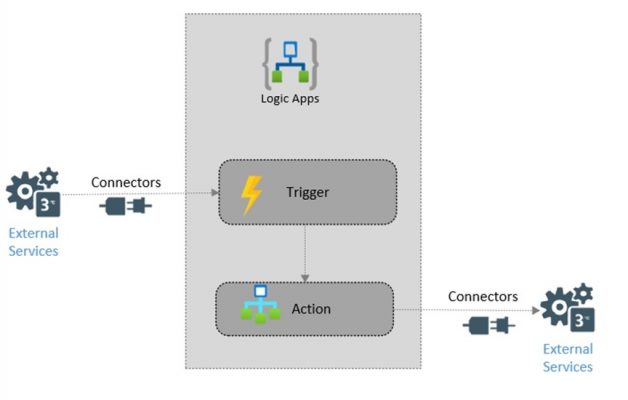 #Trigger. An event such as a file being created on a share.

#Action. A subsequent action in response to the trigger

For building integration solutions with Azure Logic Apps, we can choose from hundreds of ready-to-use connectors. These connectors provide Triggers and Actions for creating workflows to access these services and process data in real-time.

The Logic App workflow starts with a trigger, which fires when a specific event happens or when new data that meets specific criteria is available through a connector to external services.

Each time a trigger fires, the Logic Apps engine creates a logic app instance, that runs the actions defined in the workflow. Usually, the Logic App executes its actions on some external services using a connector to connect with them. This makes it an excellent tool for integrating our app with external services and orchestrating them.

Enterprise integration pack is a solution for enabling B2B and EAI scenarios in a Logic App. Most of the capabilities of BizTalk server or Microsoft Azure BizTalk services are covered in the Enterprise Integration Pack.

Both Biztalk and Logic apps offerings address the same area, but BizTalk focuses mainly on on-premise and hybrid integration where the Logic Apps addresses integration needs via Software as a Service (SaaS), although it can be customized with connectors for on-premise applications, LOB, etc.

Below is a short comparison matrix between BizTalk and Logic Apps:

Additionally, Azure Logic app solution provides some advantages such as:

-Requires zero upfront setup costs, and like other Azure services, don’t have to pay for infrastructure maintenance because it’s fully managed by Microsoft. Enterprises can develop its B2B integration flows, wire the required systems together and publish the artefacts in quick time.

-The initial investment for a small EDI project in Logic app wouldn’t be that high compared to a Biztalk as a traditional integration platform that needs investment in licensing, support and infrastructure.

-With serverless compute, the Logic app easy scales out and workflow runs with the resources it needs without need of provision extra VMs. This saves a lot of time and money, which often need to be invested in specialized skills as mentioned above.

-In a traditional integration platform, hardening of the platform requires a managed services team. No more worrying about the system going down due to whatever reason in case of an Azure IPaaS solution approach

– Connectors reduce and eliminate potential integration challenges in connecting apps, data, devices and services together because it’s easy to use

In the next posts, we will demonstrate EDI message processing using logic apps. It will include the creation of Integration account, the creation of partners and agreements and the creation of logic appears to send and receive AS2 messages from one partner to the other. Please follow us on LinkedIn to keep up with all the latest blog contente