There have been a huge number of additions to the Azure platform over recent months, with a few exciting features for those of us in the BI world.

At the second Adatis Hackathon we decided to delve into these features to see what we could create. The plan was ambitious to say the least – three teams would each take a different new feature and attempt to assemble them into a coherent system.

STREAM team would fake a thermostat reading, push it to an event hub and aggregate the data via Stream Analytics.

DREAM team would use this data to predict how old the system has to get before it starts breaking and needs to be replaced. They would achieve this via Azure Machine Learning.

Everyone involved was new to the particular technologies we used, just in case it wasn’t challenging enough. 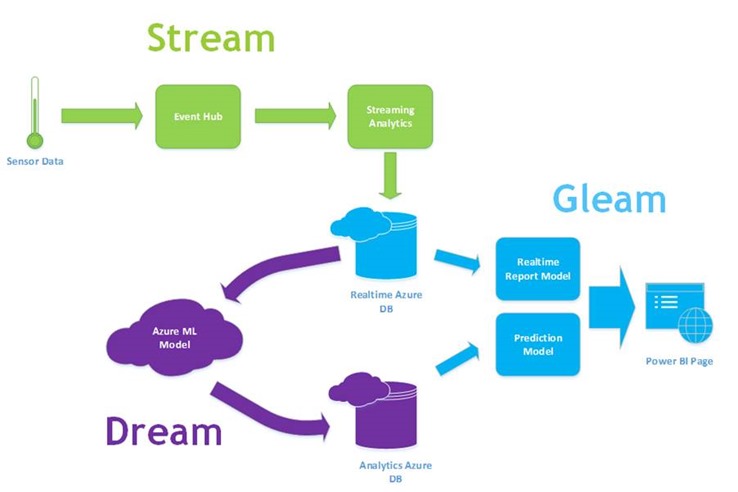 I captained the STREAM team, with a hope of understanding stream analytics’ role in the future of cloud BI and whether we’ve finally achieved true real-time BI. DREAM and GLEAM will be posting their findings over the coming weeks.

We were up and running incredibly quickly – we spun up an event hub and had it populated with event data using a demo C# script grabbed from a tutorial. We then followed the quickstart guide and had a stream analytics service working away, depositing data.

There was a rather tense moment as we sat waiting for the streaming data to get back to us but, sure enough, we started seeing record counts on the dashboard and records begun to arrive in our Azure DB.

So, having achieved the basic POC very quickly, we went back and added more details to the message stored in the event hub. Just a couple of additional string and numeric attributes that we could use in some interesting aggregations.

This is where our problems began – we had to fiddle around a little, recreating the event hub a few times to be very clear about what was making it through. However Stream Analytics proved nearly impossible to debug. There are operational messages when things clearly aren’t working – you’ll see errors in the operational log when it can’t connect to the database etc, but we got to a point where we saw 1000 input records and 0 output records with no details about why. Was our query incorrect? Were there data mapping problems at the destination? Did we need to rebuild the analytics query to refresh the metadata? We resorted to blind fixes to resolve the issue – each time having to wait 10+ minutes to see if our changes had taken effect.

In the end we ran out of time before fully getting to the bottom of the issue. Our overall impression is that it could be a very powerful service and has a myriad of uses, especially around the implementation of real-time BI. However as a development experience it is truly frustrating, there is too much black box and not enough debugging/error logging functionality.

Obviously we’re still in a preview phase and it’s entirely possible that we simply missed the various debugging options – but I’d certainly be wary of recommending a client down this route until I was much more confident that any issues could be dealt with.

Not to be deterred, I’m determined to get a more advanced streaming example set up over the next few weeks. I’ll be posting my findings when I do…