U-SQL Database Projects were released today (see here for the announcement from Microsoft) and it promises easier development and deployment. I’ve blogged in the past about using PowerShell to deploy U-SQL scripts, and I’ve worked with the older “U-SQL Project” project quite a bit, so I wanted to try the new project out as quickly as I could to see what it has to offer.

Once you’ve updated to the latest version of ADL Tools, you’ll be able to select the new project type:

The project contains a number of database object templates, allowing you to get off the mark quickly with development, and the project allows all of the usual visual studio organization with folders, and intellisense in the code editor. 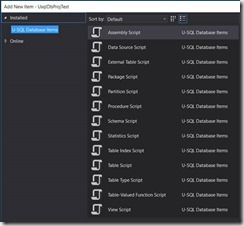 Here’s the template of a Procedure Script item:

The projects integrates much more nicely with TFS than the older “U-SQL Project” does.

It actually gives you the icons (padlock, check mark, etc..) in the solution explorer, so it actually looks like it’s under source control!

Something that I’d really hoped had been fixed, but hasn’t, is when copying and renaming an existing item, it doesn’t recognize the rename. You have to undo the checkout of the non-existent object (the copy, before being renamed):

Something that has been fixed is that with the older project style, you wouldn’t be able to edit the “Procedure2.usql” item from my previous example until you’d checked it in – now you can!

Where you’re deploying to is controlled by the Cloud Explorer in Visual Studio and which Data Lakes you have access to. By right clicking and selecting deploy on the project, you are presented with a simple dialogue box where you select which Data Lake Analytics account, making it nice and easy to deploy to development vs UAT, etc…

The Database Name specified in this textbox is the name of the database your project will be deployed to. Unfortunately, it is just a free form textbox, so be careful of any typos!