Take the following example where I have one record which contains 2 columns, my 2nd column containing multiple values which I want to split out.

Previously I would have used some string manipulation and the xml data type to split the values into column 2 out as separate values using code like that shown below.

Now all I have to do is call the SPLIT_STRING function in SQL Server 2016 simply specifying the string to be split and the value to split by.

This works fine if you just want to split a single string, but if you have multiple values you want to split then you will need to use CROSS APPLY.

Given the table below with two columns which replicate the query above.

I would now need to only write the following query which is a lot neater and easier for anyone reviewing my work to understand. Here I am simply asking it to split out values found in the OrderID column using a comma as the value to split by.

One thing to note, is that this function will not strip out any leading/trailing spaces so this will have to be handled either by using RTRIM and LTRIM or a REPLACE function. The following screenshots show the issue and my resolution 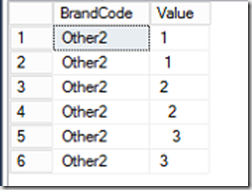