In PerformancePoint Server 2007 Planning, you build centralised business rules in a new language called PerformancePoint Expression Language (PEL).  PEL is very MDX-like and relatively straight-forward to pick up, if you are even a little familiar with MDX.

The beauty of PEL is that it can generate either MDX or T-SQL scripts from the same PEL Expression.  This allows the developer/analyst to target either the cube itself, using MDX Script, or the fact table, using T-SQL, depending on which implementation approach is more suitable for the type of calculation and from a performance perspective. 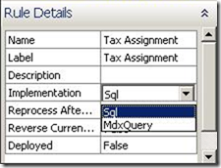 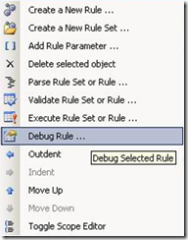 With the Rule saved (it does not have to be deployed) you use the rule context menu to debug the rule.

If you come from a development background like me, you may expect a little more to happen than what actually does happen !

Depending on what implementation you have selected, and whether or not your PEL is valid, either the MDX or the T-SQL is generated from the PEL and displayed in a window.  It’s important to realise that the PEL expression has not been run.  It is for information purposes only.

From this point you can eye-ball the resultant query to help determine your issue or, as I tend to do, cut and paste into a New Query window inside SQL Server Management Studio.  The resultant T-SQL tends to be extremely verbose so actually debugging the problem using T-SQL will be rare ! 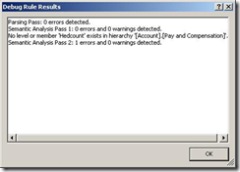 If there is a problem with the actual PEL itself, the reason, in the form of a (normally) reasonably helpful error message is displayed in the window, instead of the resultant MDX/T-SQL.

I was initially a little disappointed with the built-in debugging facilities, but considering the target audience of the Planning Business Modeler, full integration with SSMS or Visual Studio was never going to be a consideration.  But, to be fair, it is probably just enough; the debugger is primarily aimed at ensuring your PEL is correct, it stops somewhat short of helping you debug the actual business logic but this can be handled if you cut, paste and hack the resultant MDX or T-SQL into another tool and even that becomes less and less necessary as you develop your PEL writing skills.