Back in October 2016 at SQL Pass, Seattle, Microsoft announced that Power BI was going on premise.  Along with the big fanfare, there was also a Technical Preview released – in which a user could download a pre-built VM from Azure Marketplace and get a first look of how SSRS and Power BI could work together.

Roll on a few months (January 17th 2017 – to be precise) and the new Technical Preview is available.  This time, you can actually download a standalone copy of Power BI Desktop (for SSRS) and a slimmed down SQL Server Reporting Services 2016 configuration tool.  If you follow the official Microsoft blog, getting set up is really easy.  Just a heads up – there are still lots of limitations with this preview, which can be found at the bottom of the January blog.

The blog will be broken into two parts – with Part 1 focusing on my experiences with the January Technical Preview of SSRS and Power BI.

Setting up a local SSRS Server (on my own machine) and deploying a Power BI Report was really easy, which is good feedback in its own right.  Annoyingly, only Analysis Services connections are currently supported within the preview Power BI Desktop application and all of my workbooks use online services or SQL Server databases!  This meant I had to download a tabular model for Adventure Works and create a quick test report using the dataset.  Not a major problem, but an inconvenience nonetheless.

All of my other observations are based around differences between the regular SSRS service and this new offering.  In essence, not much has changed – which can only help a user’s experience.  Here are the things to be aware of:

There are two new options – ‘Scale-out Deployment’ and ‘Power BI Integration’.  The latter is the one we care about.  In effect, you need to tie SSRS version of Power BI Desktop (which is available through the Technical Preview install) to the SSRS Configuration. 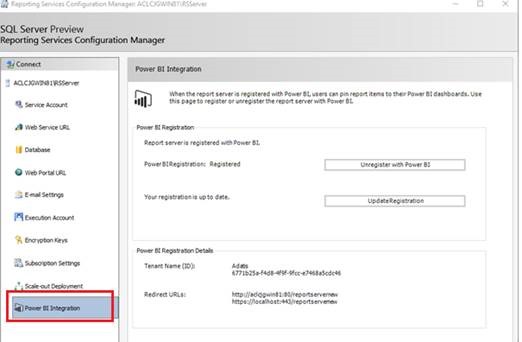 The application looks pretty much the same, with the only differences highlighted below.  The most important bit is saving the report to the SSRS Server.  I thought it would have been under the ‘Publish’ option, but Microsoft opted to put it in ‘Save As’.  The application itself is called ‘Power Bi Desktop (SQL Server Reporting Services)’ and I imagine it will stay this way, in order to differentiate between On-Premise and Cloud versions. 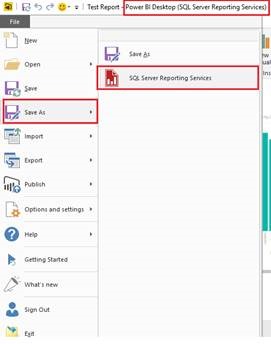 The final step is to define the SSRS Server.  A grid appears and you can either choose an old URL or define a new one.  As long as you are connected to an Analysis Services model and type in the correct server name, then the report will successfully deploy. 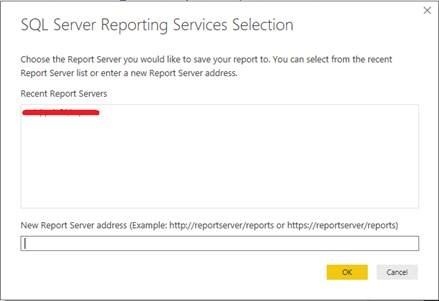 I deployed a test Power BI Report to the local SSRS Server and there are a few specific options now.  By clicking the ellipses, you can open the report as normal, Edit directly in Power BI Desktop or even download the pbix file.  Notice the ‘Power BI’ icon on the tile of the report, which also helps with distinguish the type of reports in the SSRS portal.

My first impressions of Power BI On-Premise are good.  Whilst there are still some clear gaps and limitations, the fact that Microsoft are looking at bring SSRS and Power BI together must be a good thing.  They recognize the need to bring Mobile, standard On-Premise and ‘director pleasing’ reports together in a one stop shop.

I am certainly excited about the next Technical Preview for Power BI On-Premise.  Not only should it contain more data connectors and features, Microsoft should reveal more about the long term visions.  Look out for my next blog where I will discuss licensing implications, architecture and some of the common Power BI questions I get from prospective clients.